Switching to an Electric Car

While I cycle to work and most other places, Mrs Green Mohawk is reluctant to become a carless household. This means we need to find a way of achieving motorised transport without significant expense and emissions. I expect this is a universal hope across most households, so let’s get it worked out. Since we started the journey to energy freedom– freeing ourselves from fossil fuels, and energy bills in the process, one of the main aims was to get away from oil powered transport. Very happily, this is now a reality. We have switched to an Electric Car. I’ll never be going back to a fossil fuel car! 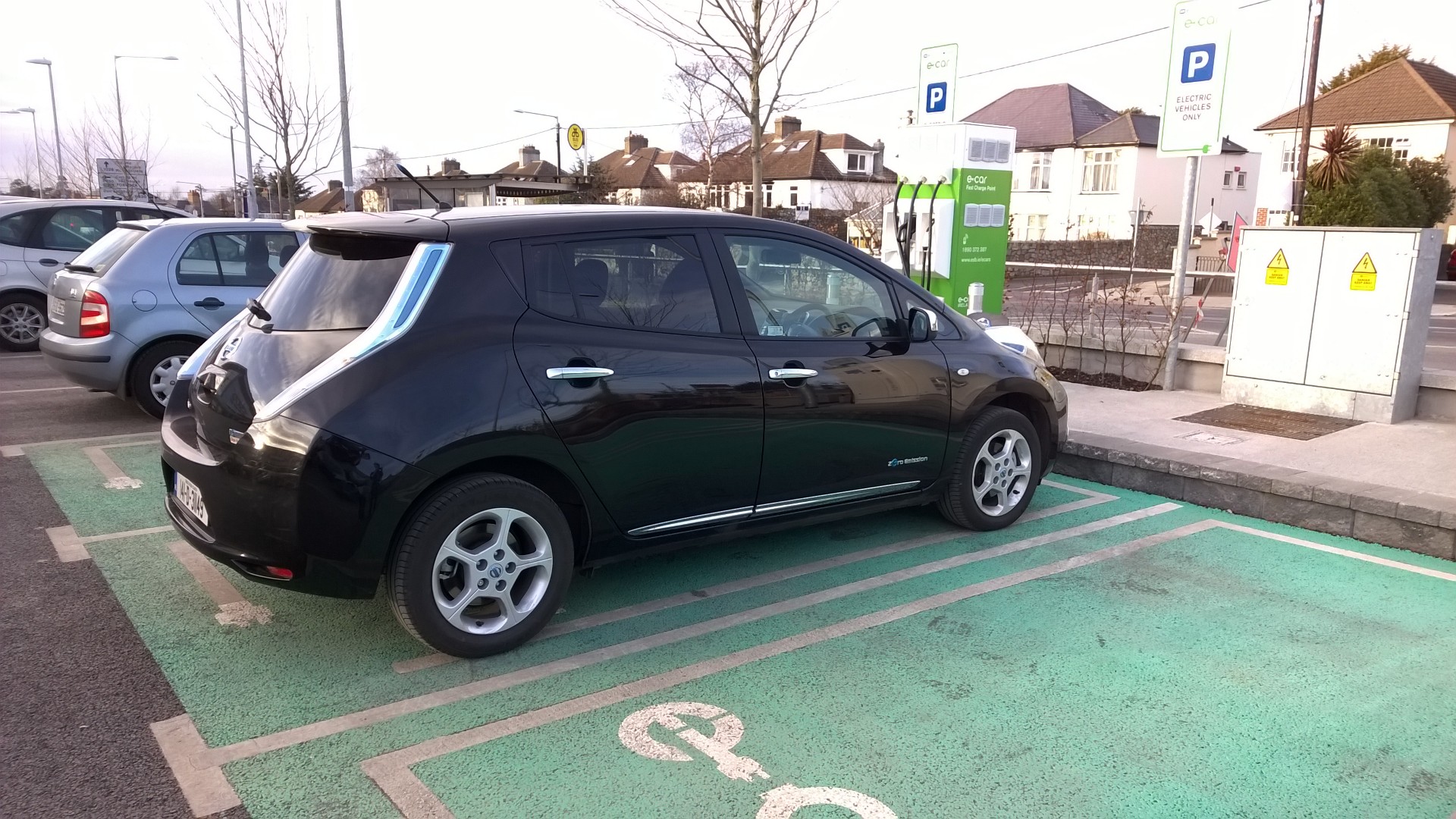 How it’s worked out

Way back in the initial look at home heat consumption (Installing Installation!), the breakdown of energy costs came to this: Heating our average house consumes 29kWh per day. Powering the house’s electronics consumes 13kWh per day, but the car.. That consumes a whopping 40kWh per day! 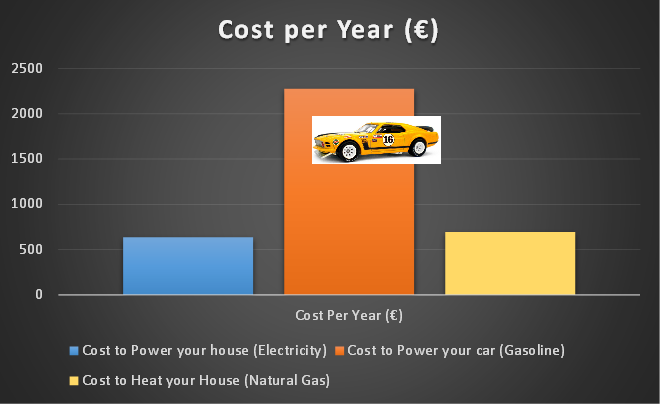 If you drive a petrol / gasoline powered car, then this energy spend is enemy number one – a whopping 40kWh per day!

The car consumes a disproportionate amount of energy for a few reasons:

From an energy point of view, this just won’t do! Wouldn’t it be great if when you hit the brakes, the engine ran in reverse and started pumping fuel back into the fuel tank. But there is! It comes in the form of a Lithium Ion battery. An electric vehicle removes these inefficiencies, to use the money you pump into the car in the form of electricity into far more efficient momentum.

Battery technology is experiencing an explosive growth as transport and renewable energy companies pour money into research in the area. The range of the Nissan Leaf has gone from 110km / 70 miles in 2011 to 150km / 93 miles in 2014, to 172km / 107 miles in 2016 and a projected 500 km (310 miles) for the 2017 model. Nissan have increased the storage of the Leaf battery from 24kWh (2011 to 2014) to 30kWh (2016) to 60kWh (2017) in the same amount of space inside the vehicle. It’s obvious that battery density per unit space is experiencing its own Moor’s Law. I suggest reading the fantastic Wait But Why article on Tesla and the Battery Storage Revolution to understand the monumental change that will bring in terms of removing people’s dependence on fossil fuels and the associated costs.

For me, this meant moving to an electric car. Like everything on the Green Mohawk – this was an investment intended to create a mutually beneficial situation in terms of personal wealth creation, and environmental impact reduction.

First the baseline cost of running our current car

So now I knew what I was using, I was able to estimate the potential savings to evaluate this investment. After some scouting, I found a second hand Black 2014 Nissan leaf Acenta with 5000km on the clock for €16,000 (about $18,000). While I live in Ireland, the UK has a significantly bigger second hand car market. Usually, there would be an import tax of around €5k to import a car to Ireland, which car dealers in Ireland lobbied the government to introduce to protect their trade. However, I realised this tax is based purely on tailpipe CO2 emissions. The Nissan Leaf has zero tailpipe emissions. Huzzah! Importing the car was free. So that was a good start.

Estimating the running costs of the Nissan Leaf

Cost Estimate: Firstly, the road tax of €570 drops to the lowest emissions category for the Leaf: €120 per year.

Because the Leaf on sale was only 8 months old, it was still warrantied for 5 years, so no significant maintenance cost for the next 5 years. We replace the petrol from petrol stations with electricity from our house, and from public charging stations. Funnily enough, all public charge points in Ireland are completely free, and I’m lucky enough to live within 2km of two fast charge points. So it would actually be possible (and I know several people who do) drive with no energy costs whatsoever, but let’s work out a baseline based on charging at home.

Emissions: The emissions of an electric car are no longer due to the combustion of petrol in the engine. They’re due to the generation of electricity in the power stations from which you draw power. That means they could vary from virtually zero if charged from solar, wind or nuclear, to close to that of a lower-emitting petrol car if the electricity is generated by coal power stations. The electricity grid emissions for Ireland are posted online in real time by Eirgrid here. This is today’s picture: 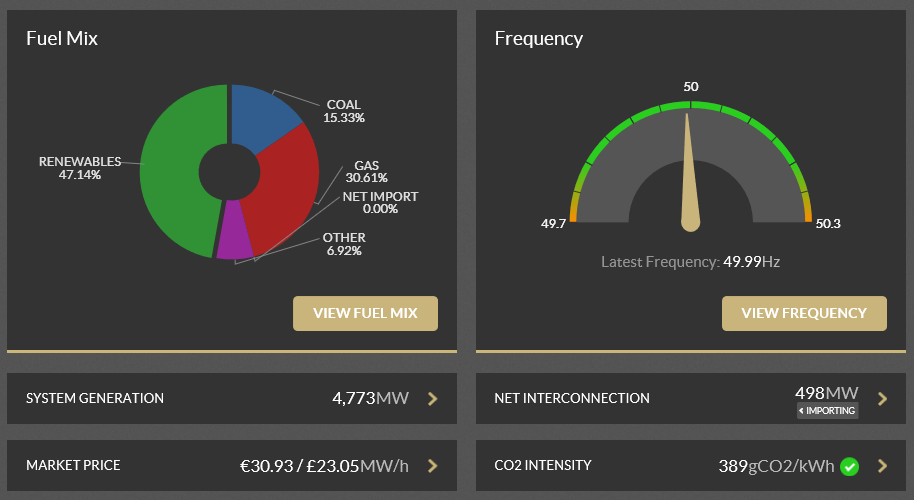 Generation Makeup Of The Irish Electricity Grid At Time Of Writing. See the real-time dashboard at smartgriddashboard.eirgrid.com

One extra factor that I considered here is the cost of renting a petrol car for longer journeys. The west of Ireland has some of the best surf (due to having some of the worst weather!) in the world, and so we drive to remote parts of the west 4-5 times a year. It costs about €50 to rent a car for a weekend off peak, so this would come to about €250. However, we’re surrounded by family and friends who like driving the Leaf, so I think we’ll just be able to swap cars when this is required. It’s certainly an option however for people without this option. If we’re saving in the region of €3k per year with the electric car, it would likely still financial make sense for people who need to drive long distances into areas not covered by charging infrastructure to move to an electric car for their commuting and city driving, and to rent a petrol car for the longer trips.

Our experience with the Leaf so far

In summary, the Leaf has worked out very well so far indeed. We haven’t had any problems, the driving experience is far superior to our old petrol car with increased acceleration, more reliable handling, on-board electronics (things like rear facing camera for reversing with augmented reality overlay of where the car will end up, the car is internet connected, excellent heating / cooling systems), and we’re saving a considerable amount of money on energy. It’s led to some further benefits around understanding our energy usage and moving our other appliances to the night time electricity rate. We haven’t run out of battery yet, and I don’t expect that we will. After buying the electric car, I came to the conclusion that Range Anxiety was invented by motor-media reviewers to have something negative to say about electric cars. No one runs out of petrol on the side of the road. That’s because they plan their journey and gas station stops around the range limitations of the petrol tank. The same holds true for an electric car – you simply plan your journey in such a way that you don’t drive somewhere further away from somewhere you can charge than you have range left in the battery. 99% of our journeys are less than 150km anyway, so we mostly don’t have to worry about it at all – we just charge the car at night when we’re asleep. This holds true for probably 95% of urban dwellers.

For longer journeys, the electric car charging network is pretty good in Ireland: 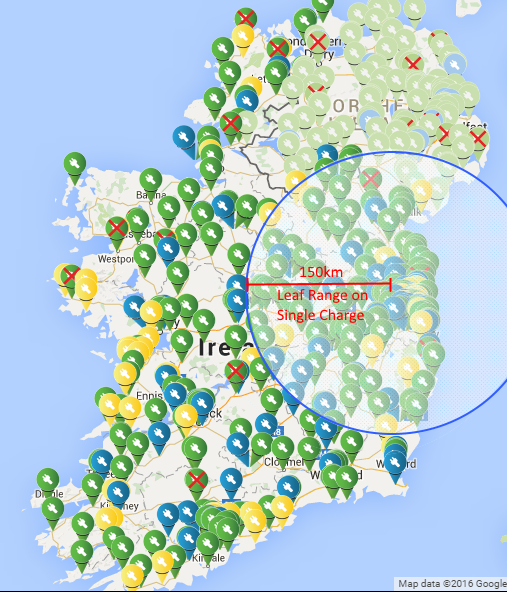 From keeping up with EV owners in Ireland, there certainly have been some teething problems, but the motorway network is well built out with fast chargers, so it’s possible to drive most places in the country using these. The fast chargers charge the Leaf to 80% in about 20 minutes from empty. The charging network is currently completely free, and it seems it will be so for at least the next year. We’ve mostly charged at home, and so I calculated the above running costs exclusively charging at home, but each charge from one of these points reduces some of the running cost. We’ve had some opportunities to charge in some nice places. You may recognise Lahinch, Co Clare from the Big Wave surfing documentary Wave Riders: 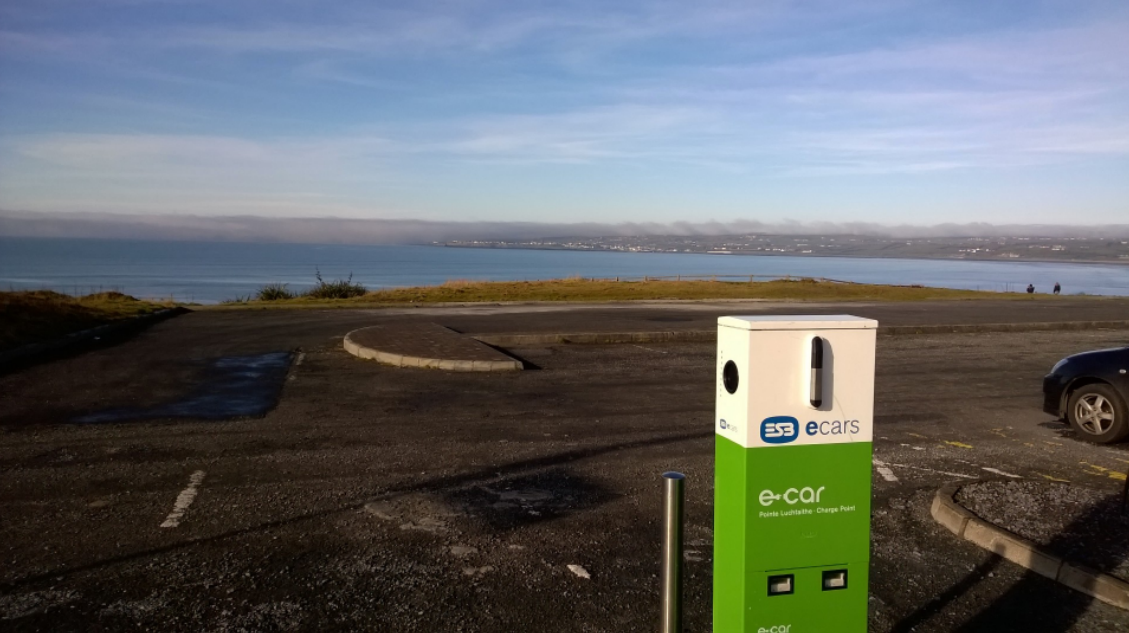 As of the December 2015, the car has had 39 fast charges and 518 slow charges. The Leaf Spy app gives very granular information into the health of the batteries: 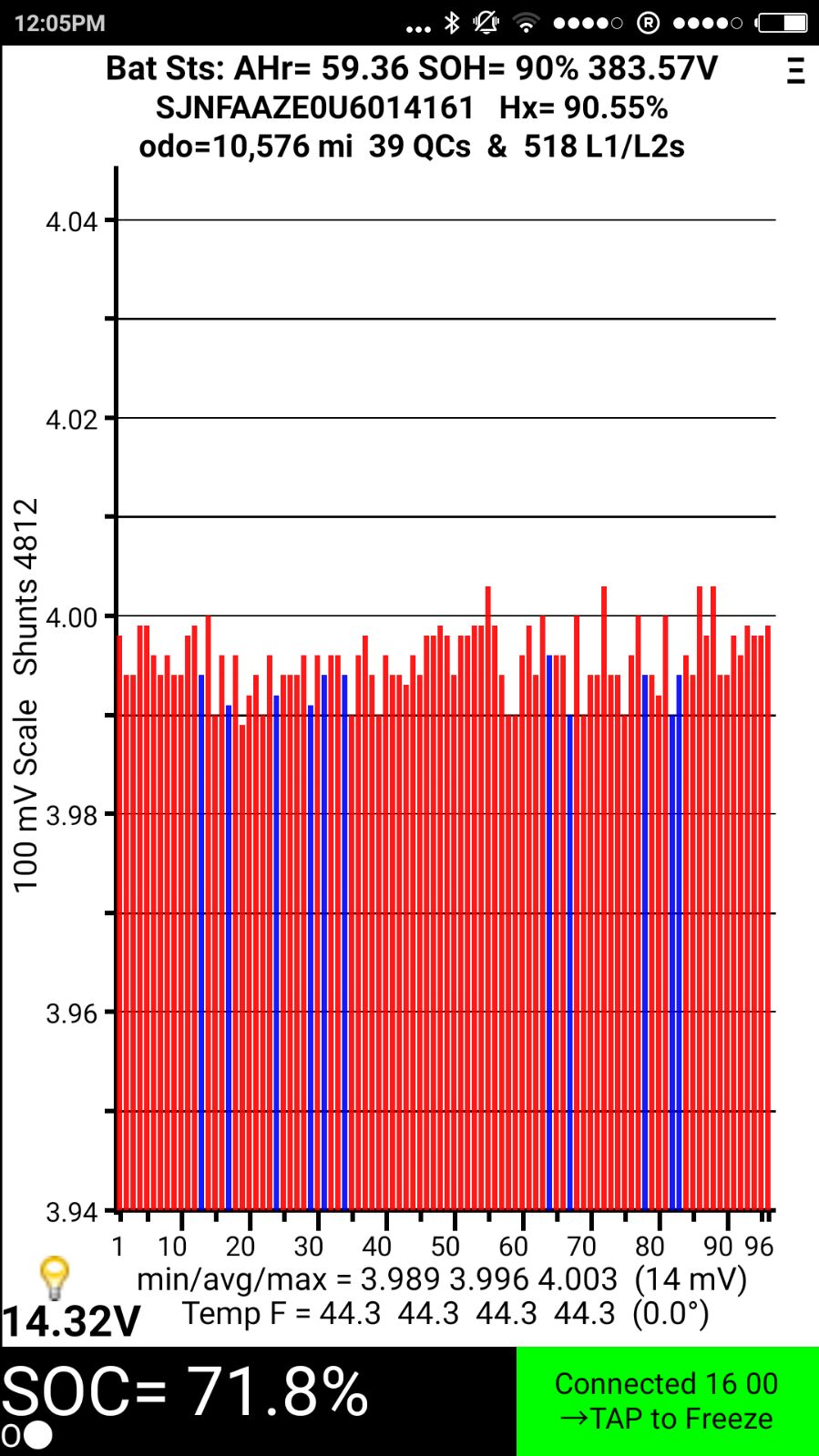 Battery history and health of my Nissan Leaf, as outputted by the Leaf Spy app.

It reads the battery capacity at 90%, although that varies from 88% – 95% depending on the temperature of the battery when it was measured. An interesting point about electric cars is that there are very few moving parts to break. In fact, the only thing that will likely need replacing at the traditional “end of life” of a car will be the battery. That means, as battery technology develops, I can simply replace the battery with the latest model, increasing the range of the car and essentially giving it a new lease of life until the next battery upgrade. This currently costs about €5000. I suspect that we’ll need to replace the battery after about 5 years. Going by the current battery density development of new Leafs, in 2019, the density will have gone from 24 kWh (150km range) to perhaps 100 kWh (600km range).

There have been a few other added bonuses to the Electric Car:

We went for a nearly new Leaf, because of the slightly longer range compared to older models, but I see 2011 Nissan Leaf models on the market in Ireland and the UK for about 50% of what I paid. The same is likely true in the US and other places around the world. If you currently have two fossil fuel powered cars, and your daily commute is under 70km per day, then replacing one car with an older used Leaf would give a payback of 3.38 years @ 300km driving per week.

This is a serious coup as an energy investment towards energy freedom. We haven’t been to a petrol station in over a year. We’re saving €2,954.8 per year with a 11,224 kWh reduction in energy use, and saving 1,630 kgCO2 per year in the process. At this stage, we’ve switched to all LED lights, installed insulation, installed a wood burning stove and switched to an electric car, the money is starting to stack up pretty fast into our energy savings fund. We’re well on our way to energy independence! Viva le progress!