1st April 2016 Leave a Comment Written by The Green Mohawk

The first post on the energy of Transport showed that if you want to travel efficiently, there’s nothing for it: use a bike. However, many car-dwellers have the a predictable reaction: “I see that cycling is way cheaper than driving.. But I haven’t cycled since I was seven and I wouldn’t be fit enough.”

What about a way to get the best of both worlds? I decided I’d try a project myself to see how easy it would be: I built an electric bike. To be more accurate, I took a normal bike and fitted an electrically powered front wheel to it. The result was something rather cool: It was easy to do. It makes cycling distances, up hills and with heavy loads significantly easier, and it opens up cycling to just about anyone. It is a genuine alternative to a car. 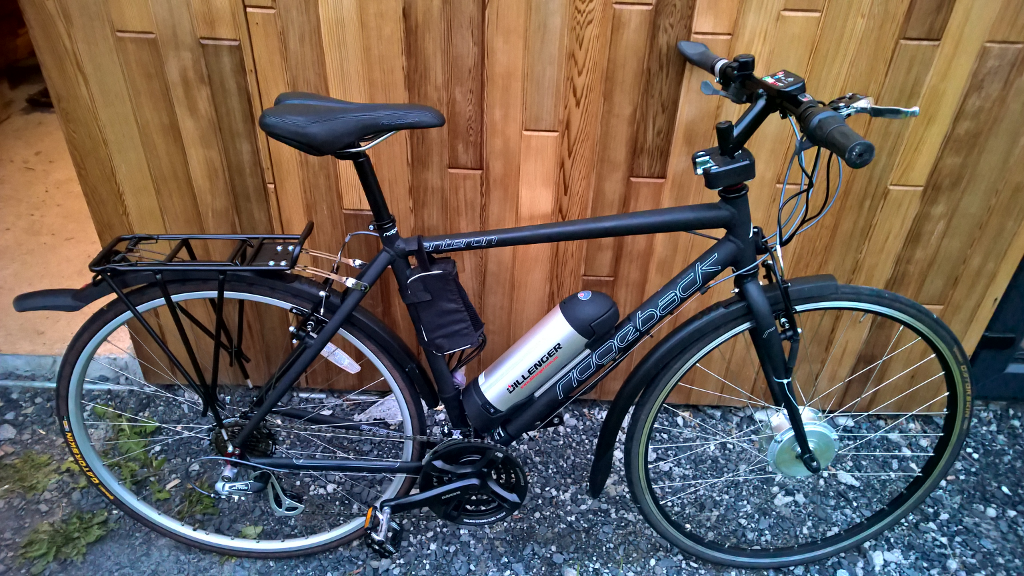 The Electric Bike: it cost €500 to turn a normal bike into an electric, an investment which delivers an annual ROI of 74.4%.

Fitting a Bike with an Electric Wheel

I ordered a 250W Electric Bike Conversion Kit from Dillinger, for roughly €500 / $600. I saw plenty of alternatives on Ebay and Alibaba ranging from €200 – €1000+, but opted for one above the cheapest with a brand which is reasonably well known. Given the Irish weather, this was going to frequently get wet.

The kit arrived a few days later. This is what it looks like in the box. It includes the electric wheel itself, the 8Ah battery, the battery holder which attaches to the bottle holder mount on the frame, the control unit which attaches to the handlebars, and the cabling to wire it all up. 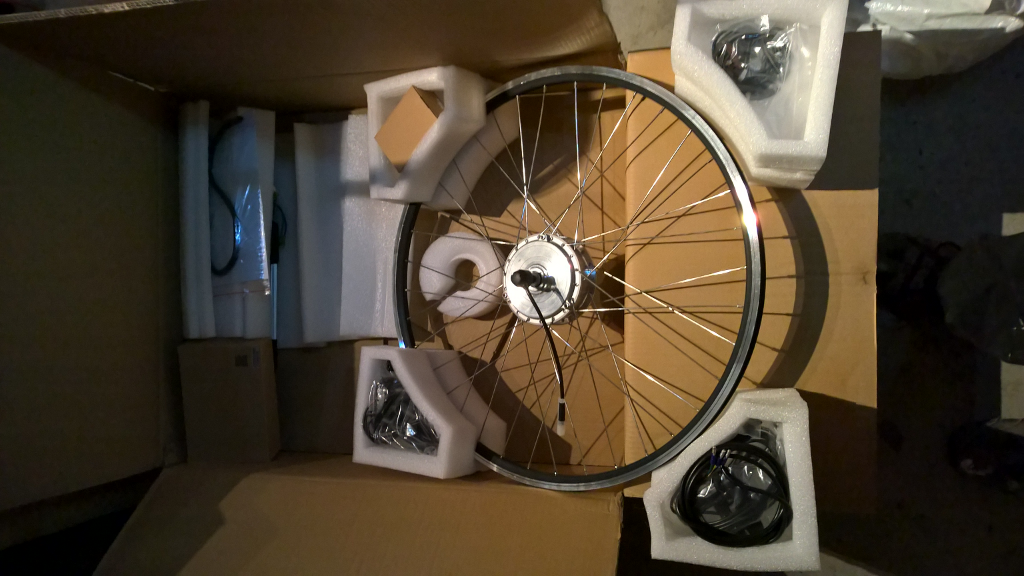 After putting a (normal) tube and tire onto the electric rim, you fit that onto the front forks like any other wheel: 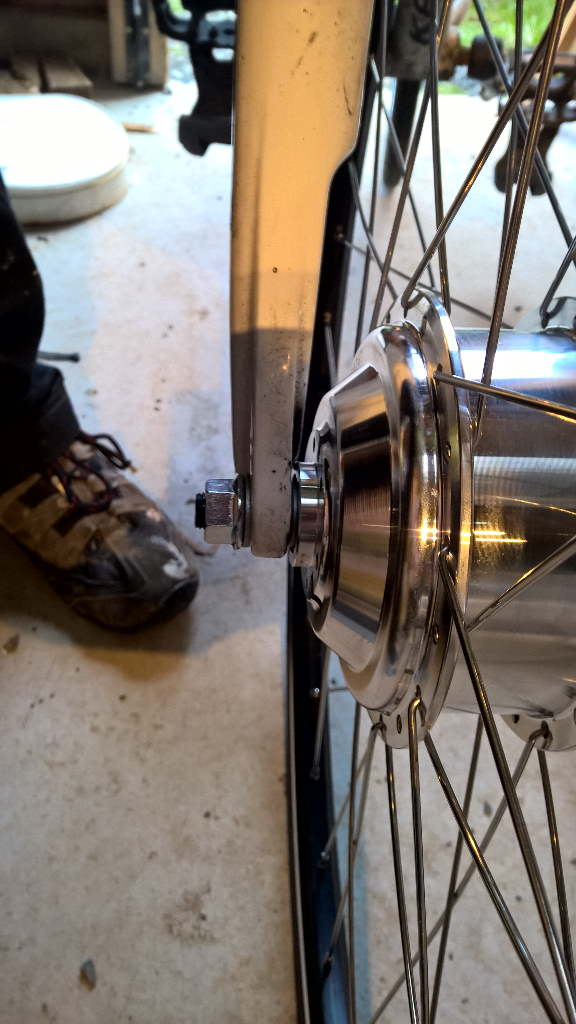 The electric wheel goes onto the frame just like any wheel, though it needs forks to be 100mm wide.

There was one tricky aspect to this in that the electric motor in the front wheel is wider than most normal wheels @ 100mm wide, and although it’s designed to fit inside most bike front forks, if you have front suspension or an unusually wide fork, it won’t fit on. You can measure the clearance of your fork in advance. You need 100mm between the forks for 700mm up the forks from where they attach to the wheel – the motor is a disc 100mm across with a diameter of 700mm. 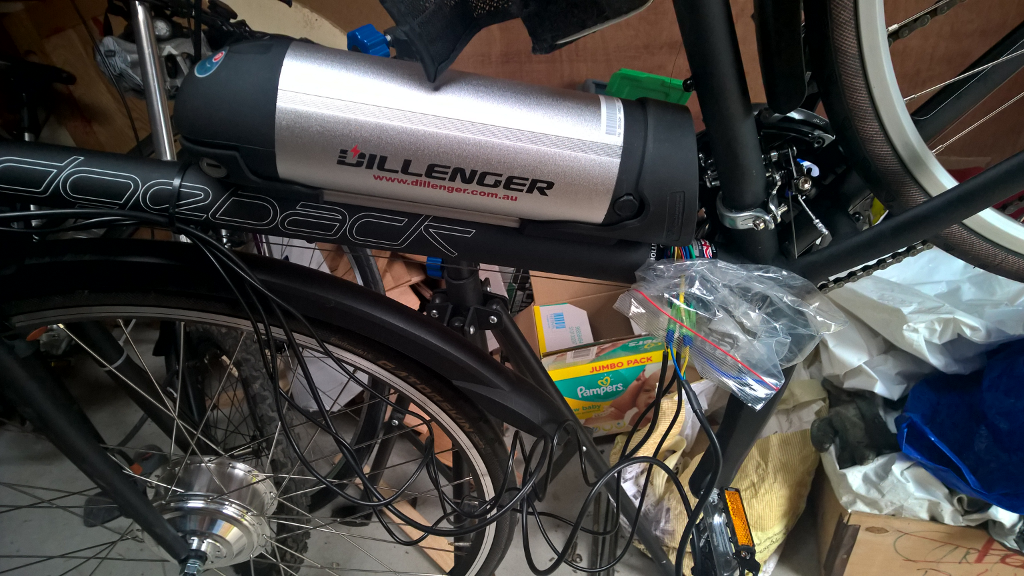 The battery holder mounts onto the bottle holder of the bike

I attached the control unit to the handlebars, along with the brake levers which automatically turn off the motor when they’re pulled: 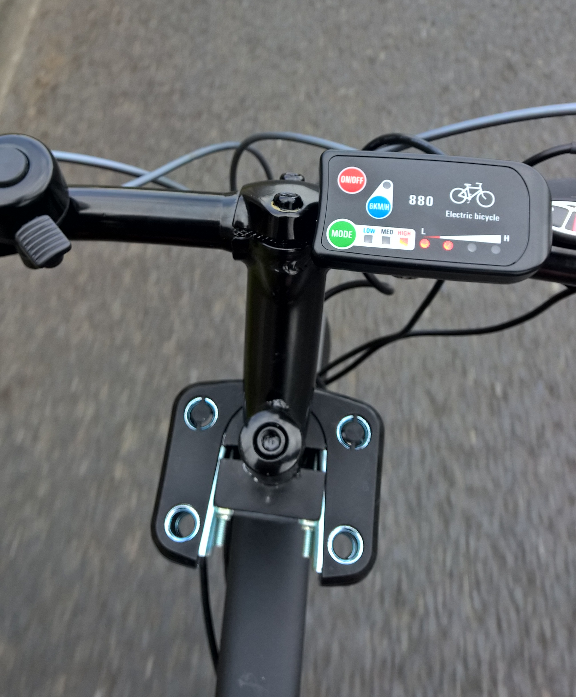 The control unit on the handle bars

I tidied up the wires with some cable ties, running them to the handlebars up the bottom of the frame with the brake and gear cables. There was some excess length in the cables, so I added a frame bag and tied up all of the loose ends in there so stop them from causing any problems: 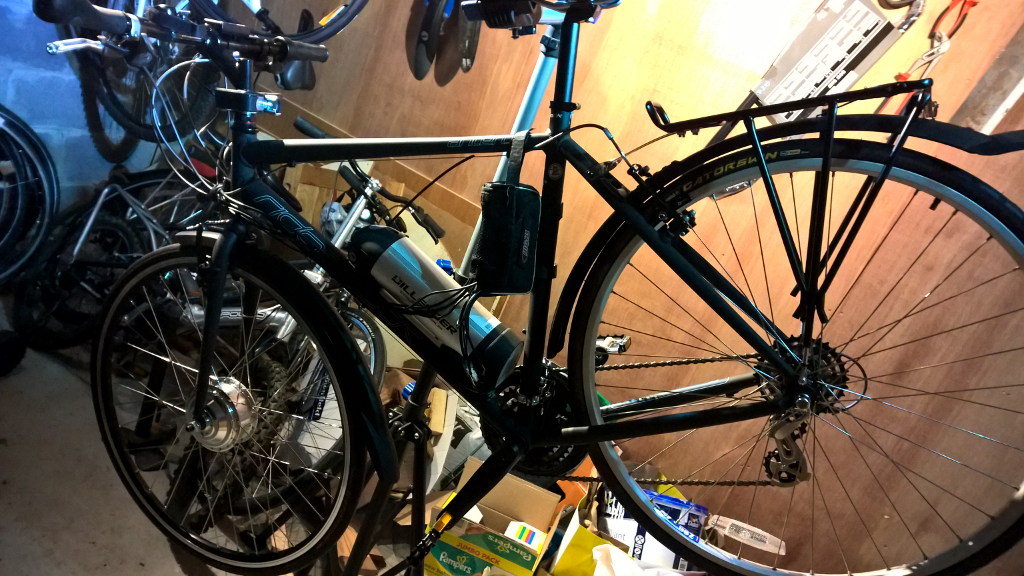 Finally, wiring up the wheel, battery and control unit.

And I was all done:

The Electric Bike: it cost €500 to turn a normal bike into an electric, an investment which delivers an annual ROI of 74.4%.

The bike came with an 8Ah battery. It holds 150 watt hours (.15kWh), and on this charge, it has a range of about 40km of cycling assistance with reasonably heavy usage (e.g. with weight on the bike and on hilly terrain). 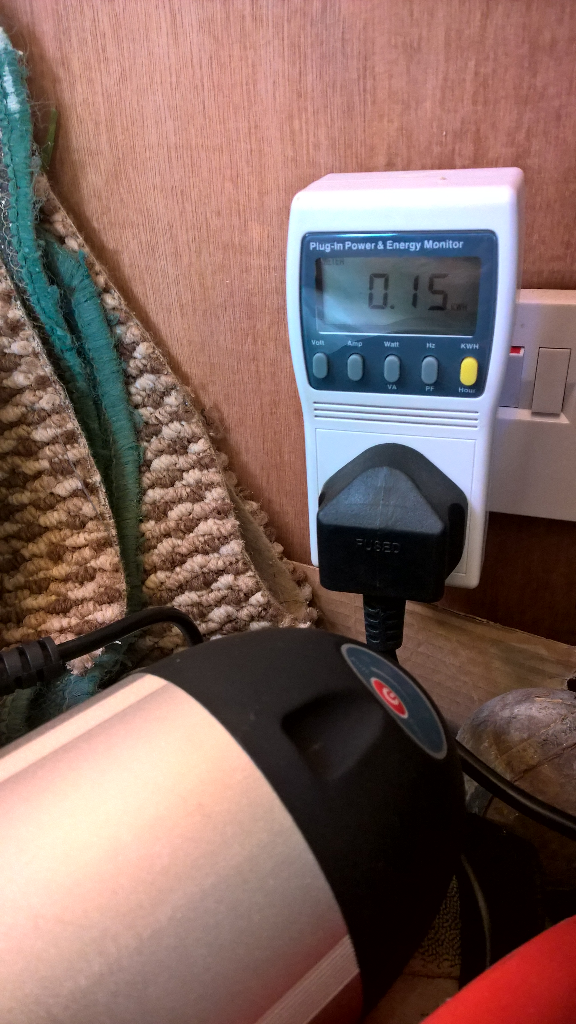 Now that we know the consumption of the electric bike, and a baseline to compare it to (a petrol car), we can work out what we stand to save in terms of energy, cost, and emissions.

To put the energy consumption of commuting with this bike in context: 7kWh for the entire year? That means your entire year of work commutes on the amount of energy it takes to run an electric shower for an hour, or to drive a gas car for 19km. 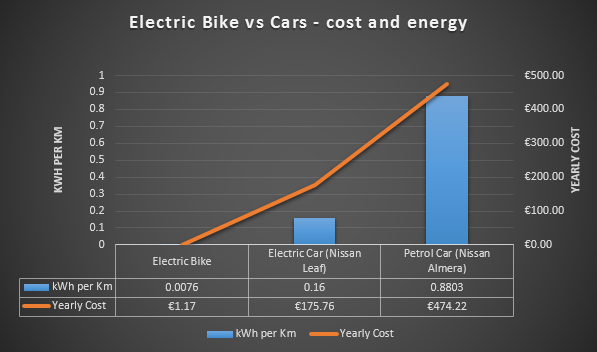 Comparing the cost and energy consumption of an electric bike (winner) versus and electric car, versus a gas car (loser).

What I like about this one is the fact that it opens cycling up as a genuine commuting option to just about everyone. It removes the biggest barriers people have, which is the fear that it will be too difficult for them to cycle any great distance or that they will be sweaty when they arrive in work. An electric wheel essentially allows you to put in as much or as little effort as you like. The end result is a commute costing 0.2% of the cost of driving to work, saving €500 per year and removing 7,242 kg CO2 over its lifetime. I already primarily cycle everywhere, including to and from work, so it’s mostly served to (1) get me places faster, (2) allow much bigger shopping loads to be carried by bike and (3) get me in and out of town when meeting friends without being sweaty. Pretty useful for the 25% or so of the time I use it.

If you’re already a hard-core cyclist, an electric bike is an optional luxury. For everyone else, an electric bike represents a way to drastically reduce or remove entirely your dependence on a car, which is a major step towards removing one of the biggest piece of energy expenditure from your life. With an annual ROI of 74.4%, it beats any stock market investment you could make with the €500 cost.