20th September 2015 Leave a Comment Written by The Green Mohawk

There is no doubt that Solar PV has taken off in a big way in certain parts of the world. It seems, in fact, that it’s on an unstoppable trajectory. It hit “grid parity” in sunnier places in the last few years (e.g. it can generate power cheaper than other power plants on the grid). This is a big deal for us people who want to bring our energy costs to zero. It is a completely assured form of energy – you know exactly how much it’s going to cost tomorrow and in ten years’ time. The same cannot be said for consuming power from the grid, which is just another middle-east or Russia-v-West geopolitical crisis away from skyrocketing in price. And even if

This chart is why I love solar: I know exactly how much the electricity it generates will cost ten years from now. I have no idea how much grid electricity will cost, I only know one thing: it will cost a lot more than it does today. 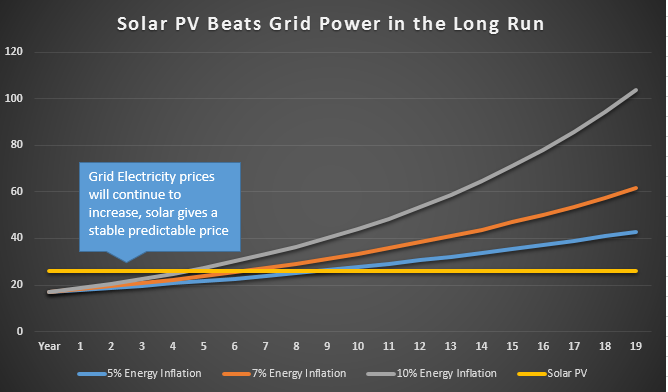 “Grid Parity”
Grid Parity means that solar electricity costs the same per kWh as fossil fuel plants (e.g. coal and gas).There’s been a big push for solar to achieve grid parity in places like the US and Australia. This line was crossed in these regions in 2014, and solar has been pulling further ahead since then (https://en.wikipedia.org/wiki/Grid_parity). Most other regions of the world will hit it by 2017: “Investment bank Deutsche Bank is predicting that solar systems will be at grid parity in up to 80 per cent of the global market within 2 years, and says the collapse in the oil price will do little to slow down the solar juggernaut.”[1]

The funny thing about this, is that “grid parity” being talked about above is the actual electricity market price. People don’t pay this, they pay the utility rate (which is anything from 50%-200% higher than this). When you install a solar PV array, you’re not competing with the $.05c / kWh real time electricity market rate, you’re competing with the $.17c. That means for people paying the usual electricity utility (basically everyone with a house or apartment), solar PV hit grid parity several years ago in the US, Australia and other sunnier regions, and has probably already hit grid parity in less sunny regions now also.

For predictions of how cheap solar will get in the coming years, see How cheap can solar get? Very cheap indeed. [2] 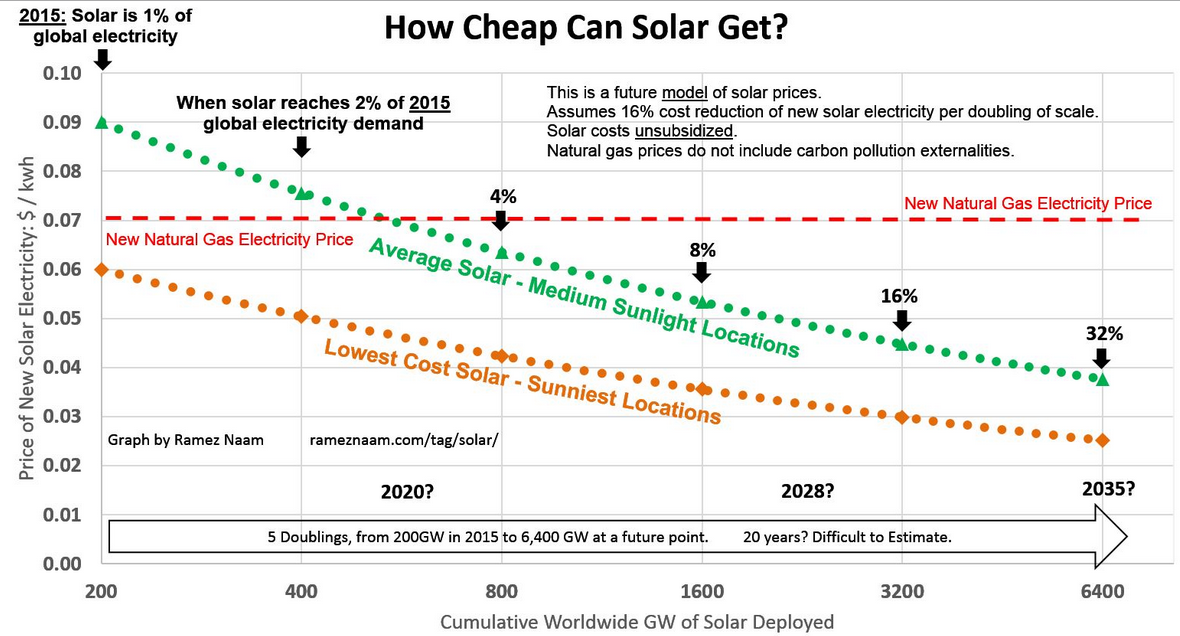 How Cheap Can Solar Get

I’m in! Where do I start?
We don’t do anything blind here – let’s figure out exactly what our options are, what the optimal Solar PV setup is for us, how much it will cost, and how much it will generate. Luckily, domestic solar PV is now big business, and there are some really useful tools to predict with good accuracy the cost, generation and payback for any solar PV setup based on the weather for your area of the world.

HelioScope is a really useful web app which allows you to indicate where on a map you would put the panels on your roof, and it will work out the generation for each month of the year based on the local weather / sunshine information, the area covered with panels, and the type of equipment you select. 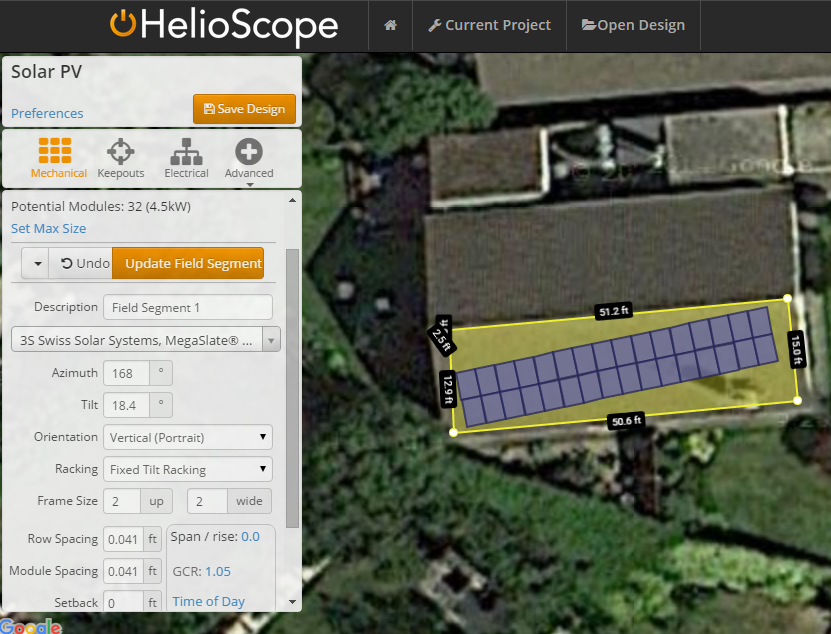 And the Economics of the Solar PV system you just designed: 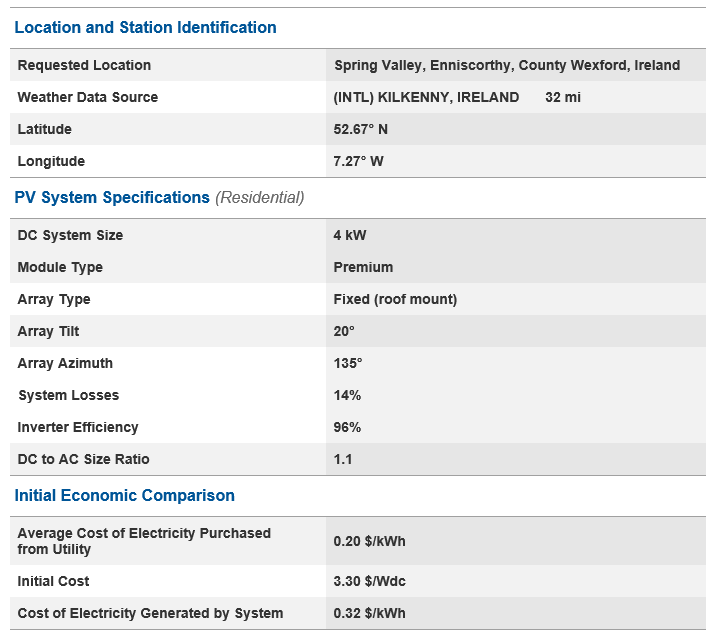 https://www.energytoolbase.com/ is another similar tool.

NREL also hosts a simpler wizard at http://pvwatts.nrel.gov/pvwatts.php to tell you roughly what a system in your area will gnerate: 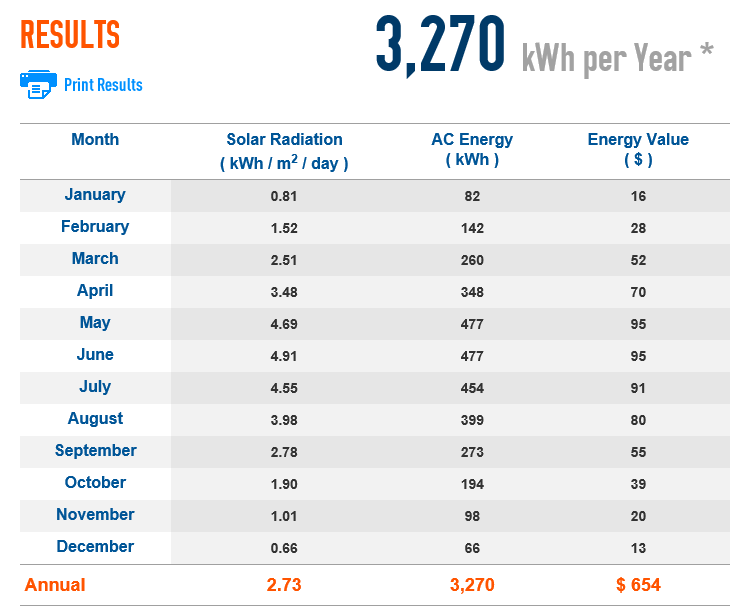 NREL has a simple wizard to work out the Generation of Solar PV on your house.

So this lays the groundwork for one of our biggest and best energy investments. We now understand the economics of Solar PV. They’re good and getting better. As always, we’ll see how this stacks up against the other energy investments we can make, and decide what will get us furthest towards our goal of energy independence. Looking at the payback of Solar PV, and the future prices of grid electricity, we’ll definitely be coming back to Solar PV.


References
[1]: Deutsche Bank Predicts Solar Grid Parity In 80% Of Global Market By 2017 http://cleantechnica.com/2015/01/14/deutsche-bank-predicts-solar-grid-parity-80-global-market-2017/
[2]: “How cheap can solar get? Very cheap indeed” http://www.energypost.eu/cheap-can-solar-get-cheap-indeed/ . http://www.energypost.eu/ is a great site in general to keep up with energy news.